What’s Crazier than a Tornado full of Sharks 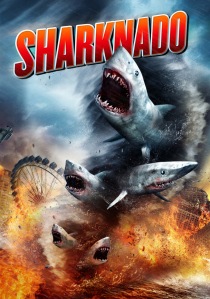 Sharks with frickin’ lasers for eyes. (Yes, that’s a thing.)

What do these have in common?

They always come out on Shark Week?

Okay, yes, that too. But keep going. 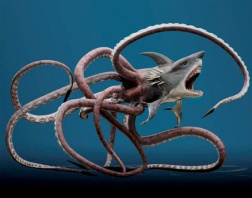 Sharks in a tornado? A cross between a shark and an octopus (which really isn’t that scary a beast, unless you’re a clam)? A giant shark (okay, yes there did use to be these megalodons)? And laser eyes? What are they, sharks from Krypton?

Okay, they’re all fine as a doodle on the side of your algebra homework (which you really need to finish; it’s due tomorrow). But let’s be honest they’re kind of, well, dumb.

But they’re not the dumbest ideas ever for monsters. And the truth is, dumb monsters can be a lot of fun. 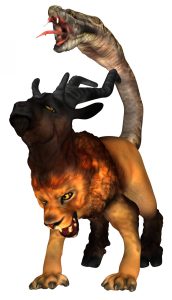 Dumb combination monsters go back a long way. The ancient Egyptians believed in jackal-headed men, crocodile-headed men, cat-headed women, and of course the original sphinx, with a man’s head on a lion’s body. The Phoenicians gave us a man with the body of a fish. But the Greeks topped them all. One-eyed giant (cyclops), men with the bodies of horses, the chimera with the heads of a dragon, a lion and a goat, the medusa with snakes for a hairdo (maybe she got all stone-faced because she couldn’t do anything with it), a man with the head of a bull, men with goat legs, a man with a hundred eyes, and worse.

But it seems every age has its bizarre combos. The Middle Ages gave us the unicorn and mermaids, and things went so bizarre in the Renaissance that travelogues seriously suggested there were men with their faces in their stomachs (talk about fast food).

Today we know that’s all nonsense. Unless, of course, you believe in Nessie, Champie, Bigfoot, Mothman (no kidding), Yetis (no, not the coolers), Chupacabras, the Jersey Devil, and human-faced goats (okay, that last one is bizarrely real)! And, of course, aliens.

Why do we create these monsters? Is it to explain, to entertain, to scare, or just because we can? That’s a question for another article, but at the library, we like ‘em all. So if you want to “check out” some monsters on your own, here are a few of our favorite literary monster mish-mashes: 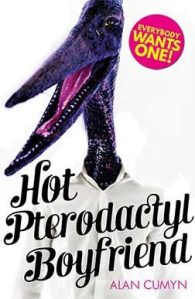 Or come by the Teen Room and peruse our Dungeons & Dragons manuals, ‘cause nothing says ridiculous monster mash- up like an Owlbear. (Yes, it’s a bear. That’s also an owl! Oooo, scary!) Unless it’s a Gelatinous Cube, which is, uh, basically acidic Jello. Shaped like a giant cube. That moves.

Sharknado, you’ve got nothing on us!

June is Lesbian, Gay, Bisexual, Transgender, Queer month and in recognition, we have compiled a list of TEEN reads that have characters and themes around LGBTQ. Check our shelves and chat with our Librarians for more info!

Will Grayson, Will Grayson by John Green & David Levithan
Two teens with the same name have paths that cross, bringing them together in unexpected ways.

Hold Me Closer: The Tiny Cooper Story by John Green & David Levithan
Tiny Cooper is BACK … and in a musical! This sequel to Will Grayson, Will Grayson is one that you definitely don’t want to miss!

See You At Harrys by Jo Knowles
Fern and her brother Holden (who is gay but hasn’t told anyone yet) world is changed when a tragic accident tears their family apart.

None of the Above by I.W. Gregorio
What it means to be not a boy, not a girl, but both.

I’ll Give You The Sun by Jandy Nelson
Twins Jude and Noah each tell their side of the story…without realized that the other half to their stories is missing.

George by Alex Gino
What happens when a boy wants to play a girl in a school play. This book tackles the issue of transgender in today’s society.

For other books dealing with LGBTQ issues, check the YALSA website.  Learn about nationally observed months implemented by Presidential Proclamation, Executive Orders and Public Law at the Library of Congress.

** As always, the opinions expressed in this blog are solely those of the author and in no way reflect the philosophies or principles of Williamson County Public Library, its staff members, their parents, children, friends, or housepets. 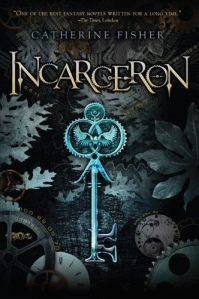 Finn doesn’t know who his parents are, or even if he ever had any. All he remembers is waking up inside the terrible prison of Incarceron, a prison so vast it seems to be a world all of itself. Finn doesn’t know how he came to the prison. The one thing he does know, is that he doesn’t belong here, and unlike all the other prisoners, he’s certain there was a time when he wasn’t inside Incarceron. And that he must escape. But there is no escape from Incarceron. The prison sees to that— because Incarceron is alive, with a mind of its own, and eyes that watch his every move, and powers that defy understanding.

Claudia knows who her parents are (or were). She knows where she is and who she is. She is the daughter of the Warden of Incarceron, the mysterious prison which no one has ever been to and no one can find, except the Warden. Claudia may not be imprisoned, but her life is far from free. Her entire future has been planned out for her, from birth on. She has been promised in marriage to the heir to the throne, to be the Queen of a rather odious future King, and the pawn of whatever power game her cold and sinister father is playing. Claudia’s desire to escape is every bit as strong as Finn’s—and to do it, she knows exactly what she needs to do: find Incarceron and fling wide its hidden, impenetrable doors, sparking a revolution.

But neither escaping from or finding Incarceron are going to be simple tasks; indeed, they may both be impossible. Because Incarceron is not what it seems to be, nor what it was meant to be, and the secrets behind it all are beyond either Finn or Claudia’s wildest imaginings.

Part fantasy, part science fiction, Incarceron is a grand adventure inside (and outside) a fantastic world unlike any other. Full of twists and turns and unexpected revelations, it’s a book that’s as hard to predict as it is to put down—you may guess some of Incarceron’s secrets, but you won’t guess them all. And unlike Finn, once you enter Incarceron, you won’t want to escape.

Recommended for all readers.