Discover the World of Urban Fantasy 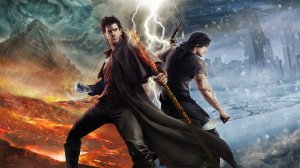 “The Dresden Files” by Mika-Blackfield

Being a lover of memoir and “the classics” (think, “books you were forced to read in high school”), I’ve felt comfortable referring to those categories in previous blog posts. But when I saw the colorful genre bookmarks we have at the library – check them out on your next visit!–, I felt inspired to explore some authors I’ve never read before.

One genre I’m pretty unfamiliar with is Urban Fantasy, so I thought I’d start there, and every research trip begins with a visit to Wikipedia, doesn’t it (just don’t tell your teachers)? From there, I gathered these elements of the Urban Fantasy subgenre (1):

This sounds like many of the bestsellers and blockbusters in the past couple of decades! So who are the storytellers behind this enduring pop culture phenomenon?

Even I, in my ignorance, recognize the name Neil Gaiman halfway down the list on the bright yellow bookmark before me. His novel, American Gods, is a prime example of the genre. In it, Gaiman posits that “gods and mythological creatures exist because people believe in them.” (2) Therefore, in modern America, new gods – representing media, the internet, and the stock market, among others – have more authority than the old gods brought over by immigrants; and fantastical creatures hold commonplace occupations. But a mysterious man wishes to shake things up, and he needs the help of ex-con Shadow to rouse ancient powers. A strange, epic journey, with elements of horror, fantasy, and magical realism, this award-winning novel has an international fan base.

Neil Gaiman, and indeed the genre of Urban Fantasy, would not be where they are today without Terri Windling. She created the Bordertown universe, tales of which have been written by a multitude of authors. Bordertown is “a dystopian metropolis that lies along the border between “the Elflands” and “The World”.” (3) The tagline on some of the book covers reads, “Where Magic Meets Rock ‘n’ Roll,” which I find charming. As one reader puts it, “the aesthetic of Celtic punk rock, elf/human gang warfare, and glamorous urban decay absolutely succeeds. You can understand why this series inspired its own new wave/nerd subculture back in the eighties.” (4) 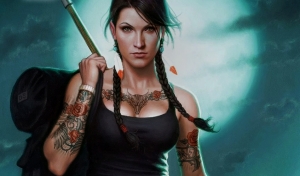 Interestingly, 57% of writers in this genre are women. (1) Another such writer who caught my eye was Patricia Briggs, with her Mercy Thompson series. Mercy is a shapeshifting mechanic who was raised by werewolves. She interacts with vampires, gremlins, and other creatures of the night. Ignore the sexy artwork on the book covers: this is not a steamy series, but rather one with compelling dialogue and a strong, sensitive female lead. There are plenty of books in this series, starting with Moon Called.

I’d like to leave you with some more author recommendations, which is a hard thing to do as I haven’t actually read any of them. But thank goodness for those bookmarks, and for Goodreads.com, a great resource for book lists and reader reviews. Searching Goodreads by genre, I found that there are some Urban Fantasy authors whose books have been reviewed by community members hundreds of thousands of times! (Side note: If you find a reviewer whose taste matches your own, you can follow him/her on the site. It’s like having your own personal book critic who delivers tailored book recommendations.)

I plan to broaden my literary horizons by adding a couple of these to my reading list. If I abandon my classics and only ever write about Urban Fantasy from now on, you’ll know what triggered it!