The Anonymous Poem that Shaped Christmas in America 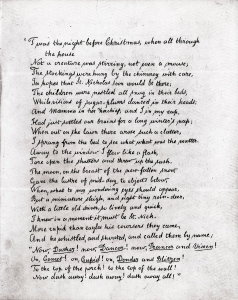 This poem is also a candidate for the most printed, quoted, illustrated, and parodied poem in America. Most people, age six and above, are so familiar with the poem they can easily supply the words to the first lines:

If you identified the rhyming words “house,” and “mouse,” you are in a vast majority. The poem is best known as “The Night before Christmas.” It first appeared on the second page of the Sentinel newspaper in Troy (New York) on December 23, 1823. The fifty-six line poem was published anonymously with the title, “Account of a Visit from St. Nicholas.” It became an instant success as it spread in papers throughout the region.

Problems of Christmas Past

While “The Night before Christmas” continues to play an active role in shaping our Christmas imagination, this was not always the case. Christmas in early America was not always welcome, for its common celebration was very different from our current practices. In New England, for instance, Christmas was seldom celebrated for the first 200 years of settlement. There was instead a strong social hostility that suppressed, and sometimes outlawed, its observance. Historian Stephen Nissenbaum (University of Massachusetts) explains:

The holiday they suppressed was not what we probably mean when we think of ‘traditional’ Christmas. As we shall see, it involved behavior that most of us would find offensive and even shocking today – rowdy public displays of excessive eating and drinking, the mockery of established authority, aggressive begging (often with the threat of doing harm), even the boisterous invasion of wealthy homes.

It may seem odd that Christmas was ever celebrated in such a fashion. But there was good reason. December was the major ‘punctuation mark’ in the rhythmic cycle of work in northern agricultural societies, a time when there was a minimum of work to be performed. The deep freeze of midwinter had not yet set in; the work of gathering the harvest and preparing for winter was done; and there was plenty of newly-fermented beer or wine as well as meat from freshly slaughtered animals – meat that had to be consumed before it spoiled. St. Nicholas, for example, is associated with the Christmas season chiefly because his ‘name-day,’ December 6, coincided in many European countries with the end of the harvest and slaughter season. 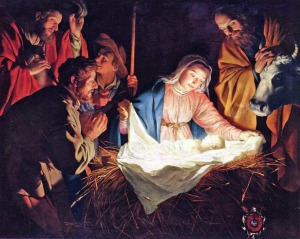 Christmas was a social challenge in early American life. To be sure, there were churches and Christians in America who celebrated December 25th for religious reasons as they commemorated the birth of Christ The very name of the holiday (holy day) recalls Christ’s Mass for a reason. The basis for the practice goes far back to the early church fathers, beginning 200 A.D. and later, meaning that the date for Christmas as being December 25th was not likely the church simply displacing the pagan celebration of Sol Invictus, as is commonly claimed. The early church rationale is clearly otherwise, for their concern was to avoid pagan ways and persecution while reasoning to a common date for Christ’s conception and death. The early church thought Jesus was conceived at the same time of year he died, reflecting a symmetry in the redemption of the world. Since Jesus died during Passover time on the 25 March, they reckoned that Jesus was conceived on March 25. If Jesus were conceived at that time of month, his birth nine months later would be December 25th.

Even though the Christian religious element was certainly a part of Christ-mas, it was largely discounted by the more influential Protestant churches which refused to choose a date for Christ’s birth because the Bible is silent on the issue. Instead of Christmas, many focused their post-harvest celebrations on Thanksgiving and New Year’s. America in the early 1800s was ready for a new Christmas emphasis. This came in part from the poem, “The Night Before Christmas.”

By speaking of the night before Christmas, the poem takes the focus from common concerns with Christmas day itself. Taking one step back, it introduces players on the scene with a delight that ignites the imagination of children and adults alike. The poem simultaneously picks up emerging social developments of the day while also promoting the same. It gleefully reframes Christmas at just the right time, in just the right way, so that Christmas takes an amazing turn which continues through present day.

The Dutch Influence: Enter the Good Cheer of St. Nicholas

“The Night Before Christmas” centers on the activities of a pipe smoking “jolly old elf” identified throughout as St. Nicholas, or St. Nick. “The stockings were hung by the chimney with care / in hopes that St. Nicholas soon would be there.” When St. Nick arrives with a miniature sleigh and eight tiny reindeer, the poet remarks, “With a little old driver, so lively and quick / I knew in a moment it must be St. Nick.” After the toy laden sleigh is flown atop the roof, to the poet’s surprise, “Down the chimney St. Nicholas came with a bound.” 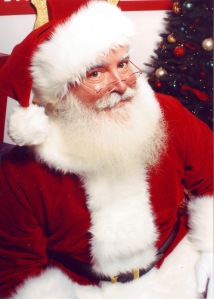 The poet then spends a full thirteen lines describing the appearance and mannerisms of St. Nick, concluding significantly: “He was chubby and plump, a right jolly elf / And I laughed when I saw him, in spite of myself / A wink of his eye and a twist of his head / soon gave me to know I had nothing to dread;” The remark about “nothing to dread” is especially appropriate. What a different feeling from Christmas past when reveling home invaders made for tense and cheerless times. In contrast, St. Nicholas leaves gifts in all the stockings, and a parting word affirming the new Christmas tone: “Happy Christmas to all, and to all a good night.”

With all the talk about St. Nicholas, it would surprise no one that the poet had connections to Dutch Christmas traditions. In Europe of the 1500s the Protestant Reformation undermined the practice of honoring the saints.  Yet Biography.com explains:

St. Nicholas, however, remained an important figure in Holland.

The Dutch continued to celebrate the feast day of St. Nicholas, December 6. It was a common practice for children to put out their shoes the night before. In the morning, they would discover the gifts that St. Nicholas had left there for them. Dutch immigrants brought St. Nicholas, known to them as Sint Nikolaas or by his nickname Sinterklaas, and his gift-giving ways to America in the 1700s.

In America, St. Nicholas went through many transformations and eventually Sinterklaas became Santa Claus. Instead of giving gifts on December 6, he became a part of the Christmas holiday. . . . The cartoonist Thomas Nast added to the St. Nicholas legend with an 1881 drawing of Santa as wearing a red suit with white fur trim. Once a kind, charitable bishop, St. Nicholas had become the Santa Claus we know today.

So the “Night Before Christmas,” focused especially on “A Visit from St. Nicholas.” The real Saint Nicholas was born around 280 A.D. in a Greek speaking area of what is now southern Turkey. He lost his parents early on in an epidemic, but inherited their wealth. As a devout Christian, he took seriously Jesus’ words to “sell what you have and give to the poor.” Even though exiled and imprisoned for his faith during Roman Imperial persecution by Diocletian, Nicholas maintained an amazing generosity to those in need, especially extending concern and protection to children.

One story of his humble generosity tells how he responded to a poor man who had no dowry for his three daughters. This meant the daughters might be sold into slavery. Under the cover of darkness, so as not to broadcast his good deed, Nicholas threw three bags of gold through the poor man’s window, and they landed in and about stockings the three girls left by the fire to dry. This eventually led to hanging stockings “in hopes that St. Nicholas would soon be there.”

In summation, turning again to the Christmas scholar Nissenbaum:

… The next incarnation of Christmas was taking shape. That incarnation engaged powerful new forces that were coming to dominate much of American society in the years after 1820—a heady brew that mixed a rapidly commercializing economy with a culture of domesticity centered on the well-being of children. Both elements were present in a new Christmas poem that soon came to define the rituals of the season in middle-class households throughout the United States. . . . . Although it was set on the night before Christmas, its subject was not the nativity but ‘A Visit from St. Nicholas.’ So it would be Santa Claus, not Jesus of Nazareth, whose influence finally succeeded in transforming Christmas from a season of misrule into a day of quieter family pleasures.

Ironic indeed. Yet there remains a subtle historical perspective unspoken by Nissenbaum. Not to be missed is the further irony of the subtle yet stupendous influence of the little Christ child lying in a manger on the youth from Turkey who became St. Nicholas. The saint who transformed Christmas would honestly say, he himself is a transformer only because of the impression on his heart by the Christ of Christmas Day. And St. Nicholas, both the historical and symbolic, would no doubt continue this hearty good will in wishing,

“Merry Christmas to all, and to all a good night.” 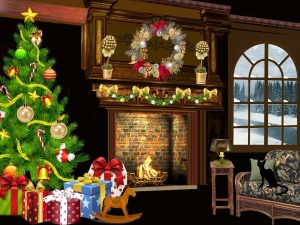 Note: “The Night Before Christmas” did not remain anonymous for long. It was later attributed to and claimed by Clement Clarke Moore, a scholar in New York City. However, the family of Henry Livingston eventually contested Moore’s claim, saying their father had written the poem, which they and a housekeeper heard at home as early as 1807. There have been detailed studies of word usage and phraseology by two scholars who separately conclude the internal evidence points best to Livingston as the author. But the external evidence has in the past led most to attribute the poem to Moore.