Grab Your Library Card, and Glass Slippers and Come On a Cultural Journey! 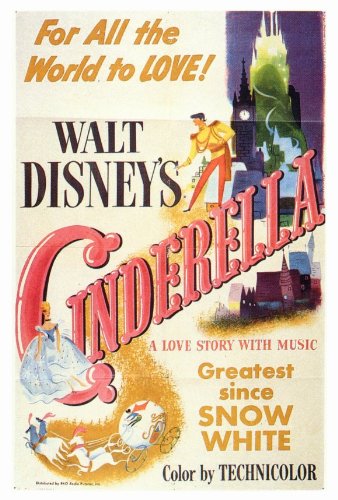 It’s Elsa! It’s Moana! It’s Jasmine!  What do they have in common?  They’re Disney Princesses!

Growing up in American culture means that not only are we familiar with the Disney Princesses, we are inundated with them. And it all really started with the famous Cinderella; a mistreated girl forced into servitude by her evil step-family, who eventually finds love (and an escape) with a charming handsome prince.  Cinderella was released after 2 years of production on February 15, 1950, a full 13 years after Snow White and the Seven Dwarfs, and after having been “in the works” since 1933.  It was one of the few great commercial hits of that time period for Disney and was also nominated for three Academy Awards: Best Sound Recording, Best Music Original Song for Bippidi-Bobbidi-Boo, and Best Music Scoring of a Musical Picture.  Unfortunately, the movie lost in all three categories even though the music was innovative in their use of vocal multi-tracks.  And while Snow White may hold the title of the First Princess, it wasn’t until Walt Disney saw the success of and money made from Cinderella that he became more interested in creating more Princess stories (Sleeping Beauty anyone?), partly because if it hadn’t been for Cinderella, Disney might have lost his company due to bankruptcy.

However, this innovative animated musical wasn’t as creative with it’s story since the princess was actually introduced centuries ago in foklore and oral stories, which is a trend continued today for most princesses.  Cinderella was based on the fairy tale Cendrillon by Charles Perrault published in 1697, which was a retelling of the story Cenerentola by Giambattista Basile. Actually, Perrault’s version was unique because of the addition of new story elements, such as the fairy godmother, the pumpkin carriage, and the glass slippers. These elements, incorporated into the Disney movie, are now ubiquitous to most of the Cinderella modern retellings and the glass slippers are basically synonymous with her name.

Who would have guessed French author Charles Perrault and Walt Disney would have created a vast and enduring love for Cinderella? Since 1950, an abundance of authors from around the world have been inspired over the generations to create their own retellings that share similarities to the original story, and culturally significant differences unique to their corners of the world. According to Mary Northrup, “most of the stories include an evil stepmother and stepsister(s), a dead mother, a dead or ineffective father, some sort of gathering such as a ball or festival, mutual attraction with a person of high status, a lost article, and a search that ends with success”.

Souci, San Robert.  Sootface: An Ojibwa Cinderella Story. Illus. by Daniel San Souci. This tale features a girl who is overworked by her sisters and who wishes to meet the invisible warrior. Because of her goodness and inner vision she sees him and becomes his bride.

Adapted by Jewell Reinhart Coburn. Illus. by Connie McLennan. Domitila: A Cinderella Tale from the Mexican Tradition.  The emphasis in this story is on Domitila’s accomplishments as a cook and leather artist, skills enhanced by the love her mother taught her to include in every task she undertook. It is her dead mother’s spirit and the legacy of her training on which Domitila depends, not a fairy godmother. The rich young man who searches for her is at first enamored of Domitila’s cooking, but learns to appreciate and love her deeper qualities.

Louie, Ai-Ling. Yeh-Shen: A Cinderella Story from China. Illus. by Ed Young. Here the hardworking and lovely girl befriends a fish, which is killed by her stepmother. Yeh-Shen saves the bones, which are magic, and they help her dress appropriately for a festival. When she loses her slipper after a fast exit, the king finds her and falls in love with her. This sad and beautiful story, with gentle illustrations, is retold from one of the oldest Cinderella stories.

Climo, Shirley. The Egyptian Cinderella. Illus. by Ruth Heller. In this version of Cinderella set in Egypt in the sixth century B.C., Rhodopes, a slave girl, eventually comes to be chosen by the Pharaoh to be his queen.

Climo, Shirley. The Korean Cinderella In this version of Cinderella set in ancient Korea, Pear Blossom, a stepchild, eventually comes to be chosen by the magistrate to be his wife.

Climo, Shirley. The Irish Cinderlad this version retells an age-old Irish tale that is an unusual twist on the popular Cinderella story. Just like his female counterpart, Becan has a mean stepmother and stepsisters. Unlike Cinderella, Becan has large feet and a magical bull for a fairy godmother. He defeats a sword-swinging giant, slays a fire-breathing dragon, and rescues a princess.

Steptoe, John. Mufaro’s Beautiful Daughters Nyasha must put up with a nagging, bad-tempered sister. But when both girls are tested, Nyasha’s kindness wins her the prince. Breathtaking illustrations crown this intriguing story with a twist at the end.

Hickox, Rebecca. The Golden Sandal: A Middle Eastern Cinderella Story. Illus. by Will Hillenbrand. Maha, who works hard for her stepmother and stepsister, receives a gown of silk and golden sandals from a magic fish to wear to a wedding. This lively story will have listeners enthralled. Illustrations give a real flavor of the Middle East, with a touch of humor. An author’s note includes comments on derivations of the Cinderella story and references to Middle Eastern versions of the tale

You may think you know the Cinderella story in America but, I encourage you to take this opportunity to use your library card and visit the Williamson County Public Library.  Your Library card is your passport guide to a unique and culturally diverse journey through the eyes of these special characters on their own personal quests for love, acceptance, and happiness, within their own countries!