On more than one occasion, usually to no discernible effect whatsoever, I’ve admonished my own children as well as library patrons for seeing the movie before they read the book.  I can’t do that with the  titles in this blog, for the simple reason that a different medium preceded the book; to wit, this is a list of children’s books that were inspired by rock, pop, or folk songs.  Turn it up, y’all . . . 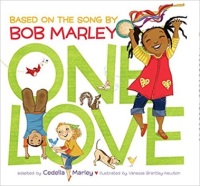 It was immediately clear to me which book/song I wanted to start this blog with, for a couple of reasons.  Bob Marley, the enigmatic and often misunderstood Jamaican singer-songwriter who achieved international acclaim before his untimely death from cancer at the age of 36, has long held a spot in my heart.  His daughter Cedella has written five books to date, all based upon or inspired by her iconic father’s life and music.  One Love and Every Little Thing (J E MARLEY) are both delightfully inspirational, and emphasize how one person can make a difference in this world, and that of course “every little thing is gonna be alright.”

Next up on my songs-to-books list is another transformative song that was also written and published in an era of revolution, war, and enormous historical and cultural changes to the American landscape.  “What A Wonderful World,” written by Bob Thiele and George David Weiss and recorded by Louis Armstrong, was not initially a hit in the United States; it sold fewer than 1,000 copies because the president of ABC Records did not like the song and therefore did not promote it, but was a major success in the United Kingdom, reaching number one on the UK Singles Chart in 1967.  The eponymous children’s book illustrated by Tim Hopgood (J E HOPGOOD) is just as sweet, hopeful, and uplifting as the song.  (Author’s note:  my very favorite writer of books for grownups, Michael Connelly, takes inspiration from this song for his complex protagonist Harry Bosch, and his next novel is entitled Dark Sacred Night, which is of course a line from this beautiful song.) 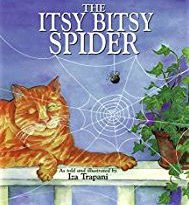 The brave and persistent Itsy Bitsy Spider from the children’s finger-play nursery rhyme is back, and on an even bolder adventure in this charming book written and illustrated by Iza Trapani (J E TRAPANI).  She manages to survive encounters with a fan, a mouse, a rocking chair, a cat, and a gigantic maple tree, and is finally able to build her web and relax.  Trapani’s rich watercolor illustrations and playful rhythm transform this simple song into a delightful journey to be enjoyed again and again.

Also from the fabulous Iza Trapani is her brilliantly illustrated Twinkle, Twinkle, Little Star (J E Trapani).  While we have several different versions of the song-to-book rendition of this sweet little song, Iza’s is far and away the best of the bunch.  (Pete the Cat’s version comes in second, because I love him so.)  Just as in Itsy Bitsy Spider, this modern spin on the traditional classic will yield many hours of reading pleasure.

Last on this list is Puff, the Magic Dragon (J E YARROW) by Peter Yarrow, an American singer-songwriter who was one-third of the 1960s folk trio Peter, Paul and Mary.  Yarrow once said, “Puff has appeared to me both childlike and wise, a king but also a willing follower of just about any bright spirit that inspired him. Puff gives his whole heart and soul to one special friend…One day, as you can see at the end of this book, a new and special friend comes to Honalee…In this way Puff and Jackie’s friendship continues through new children like you.” 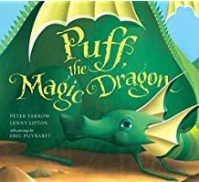 Both Yarrow and co-writer Leonard Lipton have adamantly and repeatedly stated that “Puff the Magic Dragon is not about drugs.”  He has also said of the song that it “never had any meaning other than the obvious one” and is about the “loss of innocence in children,” and dismissed the suggestion of association with drugs as “sloppy research.”  So, disregard that urban legend.  The book is comprised solely of the lyrics to the song with no additional text, but the lush illustrations imply a new twist to the sad final stanza.

Come visit the rock star librarians at WCPL to check out these and many more music-related titles to enjoy during our Summer Reading Program—which is not coincidentally themed “Libraries Rock!”  Happy Reading—

Librarian by day, aspiring fiction writer by night, and enthusiast of rock and roll 24/7/365, the author lives with her two children and four cats, not all of whom share her taste in music.

The Williamson County Public Library System seeks to meet the needs of county patrons through materials, technology, and programming at countywide locations.
View all posts by WCPLtn »