← Sequels, and Trilogies, and Series, Oh My!
Lest We Forget: The 2018 Thelma Battle Collection African American Exhibit →

We all know about Groundhog Day on February 2, when a fuzzy animal is brought forth to predict the weather. How could we miss that huge celebration at Punxsutawney, when Phil, the groundhog (the official term is woodchuck –remember the tongue twister?), is brought out of his den and the crowd goes wild. If he sees his shadow, then winter will end sooner than later, but if he doesn’t see his shadow, that means 6 more weeks of winter. Of course, this weather forecast has never been that accurate…

And of course, many people fondly remember watching the movie Groundhog Day, starring Bill Murray and Andie McDowell. It has become a “contemporary classic.”   In case you don’t remember, Phil (Bill Murray) gets stuck in a time loop on Groundhog Day, and only after he learns from his mistakes is he able to get back on track. In 2006, it was even added to the United States National Film Registry for being a culturally, historically, or aesthetically significant film.

So where does Candlemas fit in, you may ask?? This holy day is celebrated by Christians on February 2 to commemorate both the presentation of Jesus at the Temple and Jesus’ first entry into the Temple. Since Jesus is considered a “light-bringer,” the custom was to bless candles on this day as well, which is where we get the term Candlemas from. In pagan times, this day was also known as Imbolc (pronounced i-Molk), a festival marking the first day of Spring, which usually fell on February 2. Evidently spring came early in the Gaelic lands, and coincidentally (meaning it was probably a direct influence), this holy day was also used to predict the coming weather.

These poems, found in English and German, show how on Candlemas the weather could be forecast.

If Candle-mas Day is bright and clear,
There’ll be two winters in the year.

If Candle mas be fair and bright,
Winter has another flight.

If Candlemas brings clouds and rain,
Winter will not come again.

The German immigrants also brought with them the tradition of a hedgehog telling the spring forecast, but with no hedgehogs to be found, groundhogs were the closest animal they could find in the new world. And Pennsylvania has had many Germans settlers.

And now you know how Groundhog Day and Candlemas both have a place in American culture. 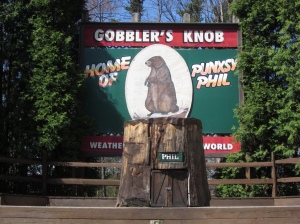 An aside: The name Punxsutawney comes from the Lenape name for the location “ponksad-uteney” which means “the town of the sandflies.” The name woodchuck comes from the Indian legend of “Wojak, the groundhog” considered by them to be their underground ancestor.

← Sequels, and Trilogies, and Series, Oh My!
Lest We Forget: The 2018 Thelma Battle Collection African American Exhibit →