Fall comes around each year, and the air becomes chilled and the leaves change colors, and it’s time to remember November as Native American Heritage Month.  We remember how Squanto, a member of the Pawtuxet tribe, assisted the settlers of Plymouth and how Pocahontas and her father, from the Algonquin tribe, assisted in helping the settlers in Jamestown.  Both were kindnesses of friendship and food that unfortunately later came back to bite them. 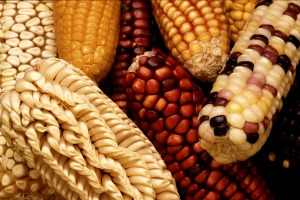 Since the history of Native Americans is so broad and diverse, during this month of holiday feasting and heritage, we’ve decided to focus on a brief survey of Native American food and cuisine.  Today, few of the Native American tribes eat the same diets that their ancestors ate, but much of the indigenous foods are now incorporated into the cuisines of almost the entire world.

Starting in the northeast, where contact first began with the English, we’ll work our way across the nation. While there were some common staples and practices, such as corn being a very important dietary staple across most of the nation, the first thing we should realize is that all tribes did not eat the same things or cook the same way.  (Keep in mind though that I am a Caucasian woman, and may get some things wrong.) 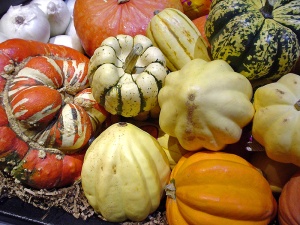 The Northeastern tribes staple foods were corn, beans and squash.  These foods were often called the “three sisters” because they were planted together: the beans grew up the tall stalks of the maize, while the squash spread out at the base of the corn and beans which provided protection and support for the roots. They also enjoyed the bounty of wildlife, including deer and turkey, along with other birds.

The Southern tribes were serious farmers, using irrigation and crop rotations.  They ate corn, cornmeal and also hominy— interestingly, you can make hominy by adding ashes to the corn, which helps the corn cook faster, and brings out more nutrients.  And of course, with hominy you can make grits. Other foods that we are still eating today were introduced to us by the tribes in the Southeast:  potatoes, tomatoes, pumpkins, squash and beans.  Their dies was also supplements by wild berries and grapes as well as peppers and sassafras; making teas and ginger like drinks. They were also manily small game hunters (rabbits and turkeys).

On the Great Plains midwestern Native American tribes were mainly hunters and gatherers. These tribes were big game hunters for bison and caribou, and many tribes would work together to capture these large animals. There was limited farming, and many tribes could only grow a couple of crops so they relied on a trade system.

In the Southwest deserts, animals were more scarce.  For meat, they often ate wild turkey, but they mainly relied on their farming.  Of course, one of the most important foods they grew was maize (corn), they even had 24 different types. They also grew beans, squash, melons, pumpkins and fruit.

On the Pacific Coast, Native Americans used salmon and other fish, seafood, mushrooms, berries, and meats such as deer, duck, and rabbit. These tribes were mostly hunter-gatherers. Since the weather as mostly good all year round, they could rely year-round on the abundant foods in the region. In some areas, acorns were ground into flour. These groups, along with almost all tribes, prepared dried or salted meat to last through the winter season.

Most of the foods we eat during the holidays came from Native Americans.  In 1621, the first Thanksgiving recorded that the feast included deer, water fowl, turkeys, shellfish, eels, squash, corn, and beans, and according to one legend, a native American named Quadequina brought a bowl of popcorn.  The traditional Thanksgiving and Christmas foods, including turkey, cranberry sauce, pumpkin pie, baked beans, and mashed potatoes were adopted by us white people.

Grits, cornmeal mush, cornbread, succotash, and fried green tomatoes are all uniquely southern foods that we learned about from Native Americans.  Some people in the South still hunt raccoons, opossums, and squirrels, as did the Native Americans; venison is still eaten throughout North America. And what would life be like maple syrup. Southwestern and Mexican foods were also heavily influenced by Native Americans. The food sharing was so important that there is a term, the Columbian Exchange, which explains the sharing of Native American foods with the while settlers, as well as around the world.  They, on the other hand, got many of our diseases as well as some of our foods and weapons.

Over 4 million people have tried Native American food for the first time.  It’s entertaining and you can also see what a few dishes look like.  The consensus is that the food is good, and people want more.

And now for some recipes, because we can’t talk about native American foods without showing some basic recipes…

This is one for you outdoor cooks, so start up your grills. Meanwhile, inside on the oven:

Note: The chicken will get very dark and crispy skinned during the process—this is normal.