Branwell’s portrait of the Brontë sisters. He painted a column over his own likeness in the center, but the image has re-emerged over time. From left to right: Anne, Emily and Charlotte

Charlotte, Emily and Anne Brontë spent much of their short lives cloistered in a small English village parsonage, yet created some of the world’s most important novels, including Jane Eyre and Wuthering Heights. But another gifted Brontë sibling, who shared the same upbringing and artistic ambitions as his sisters, failed at almost everything he tried. April 21 marks the 201st anniversary of Charlotte’s birth, but instead of celebrating that landmark, let’s take a look at Patrick Branwell Brontë and the impact he had on the lives and works of the Brontë sisters.

Patrick Branwell Brontë (Branwell) was born on June 26, 1817, one of six Brontë children, and the only son. In 1820 his father, Reverend Patrick Brontë, moved his family to the parsonage in Howarth, a village on the edge of West Yorkshire moors. After Branwell’s mother died a year later, his older sisters, Maria, Elizabeth, Charlotte and Emily, were sent to school, leaving Branwell and his younger sister Anne at the parsonage. Maria and Elizabeth soon died from tuberculosis, but Charlotte and Emily were brought home before they became ill.

The four surviving Brontë children were extremely close, and their imaginations and creativity flourished in the insulated parsonage. The four created drawings, maps, complex stories, and poems about an imaginary world, Angria, which was inspired by Branwell’s toy soldiers. Branwell and Charlotte collaborated closely on the Angria works, while Anne and Emily created their own fictional world, Gondal. The siblings continued escaping to the elaborate Angria and Gondal sagas into their twenties.

Branwell, slight with flaming red hair, was his father’s favorite, and the Reverend pinned his hopes for the family’s fortune on his son’s accomplishments. He was a fine scholar, described as “brilliant” and “genius.” He aspired to be a famous novelist, poet and painter.

In 1838 Branwell set himself up as a portrait painter near Haworth, but failed to earn a living and returned to the parsonage. He was, however, successful as a witty drinking companion for other local young artists. In 1840, Branwell gained work as a tutor with the Postlethwaite family. He spent his free time writing poetry and drinking with friends. He bragged that the family thought him to be a sober, virtuous young gentleman, when the opposite was true. He was fired after six months, when the family learned he had fathered a child (which died) with a local servant girl, and he crept home to Haworth.

Branwell next became “assistant clerk in charge” at a railway station. The Brontës’ hopes for his chances at advancement were dashed when he was fired for incompetence. Again, he returned to Haworth a failure.

In 1843, his youngest sister Anne, working as governess for the Robinson family at Thorp Green Hall, recommended him for a position as a tutor. Unfortunately, Branwell began an affair with his employer’s wife, Lydia. It is uncertain whether he or the much older Mrs. Robinson initiated the relationship. Mr. Robinson discovered the affair and fired the hapless young man, prompting his downward spiral.

Back in Haworth, Branwell had to face the shocked disapproval of his family. Charlotte was especially disappointed. Branwell’s use of alcohol and opiates increased, but he continued to write. He rejoiced when Mr. Robinson died, as he imagined finally achieving wealth and status by marrying the widowed Lydia. She rejected him.

Bleak cartoon by Branwell – Death challenges him to a fight

After this last disaster, Branwell gave in completely to alcohol, opium, and depression. He flew into rages, threatened to kill himself or his father, and begged friends for money for alcohol. One evening he set fire to his bed, and from that point forward his father made him share his bed for the family’s safety.

The effect on the Brontë family of Branwell’s dramatic decline was profound, especially considering his early potential. Anne may have been the first to suffer directly from Branwell’s actions. She was respected in her position as the Robinson’s governess, yet she resigned a month before Branwell was fired. It is speculated that she left when she learned of his affair.

If the depiction of the situation at the Haworth parsonage portrayed in Masterpiece Theater’s To Walk Invisible is accurate, life with Branwell was a complete misery. Branwell’s violent rages, public drunkenness and steady deterioration were horrifying and embarrassing. Charlotte ceased speaking to him after learning of the affair, and wrote to a friend that she could not allow her to visit if “he” was at home. Emily was more accepting of Branwell, and stayed up to help him to bed after his nights of drinking. One biographer argues that Emily was destroyed by watching her beloved brother’s descent into madness. After his death, Emily hardly ate, and she only survived him by a few months.

Anne at 13 drawn by Charlotte

While Branwell was wallowing in self-pity and addiction, his sisters were writing their famous novels, which were submitted with pen names. Jane Eyre (by Charlotte writing as Currer Bell), Wuthering Heights (by Emily writing as Ellis Bell), and Agnes Grey (by Anne writing as Acton Bell) were all published in 1847. All three were quickly successful, especially Jane Eyre. Anne’s The Tenant of Wildfell Hall was published in 1848.

When Branwell died at age 31 in September 1848, the official cause was “chronic bronchitis-marasmus” (malnutrition). It is now thought that he actually died from acute tuberculosis aggravated by alcoholism, drug use and alcohol withdrawal (delirium tremens).

After Branwell’s death, it was clear that both Emily and Anne were also ill. Emily never left the parsonage again after his funeral and died of tuberculosis three months later at age 30. Despite Charlotte’s care, Anne died in May of 1849 at only 29. Charlotte enjoyed much fame after publishing two more novels, Shirley in 1849 and Villette in 1853. In 1854 she married Reverend Arthur Bell Nicholls. Charlotte found unexpected happiness with Nicholls, but died less than a year later in the early stages of pregnancy.

In addition to the sorrow and disruption Branwell’s deterioration caused in the Brontës’ daily lives, he also figured prominently in their works. Here are just a few examples:

Charlotte Brontë by George Richmond in 1850

The Tenant of Wildfell Hall

The Brontë sisters’ lives were short, yet their accomplishments were great. In contrast, Branwell’s short life was marked by failure and ruin. Despite his influence on his sisters’ works, Branwell was probably unaware of their successful novels. As Charlotte explained, “We could not tell him of our efforts for fear of causing him too deep a pang of remorse for his own time misspent, and talents misapplied.” 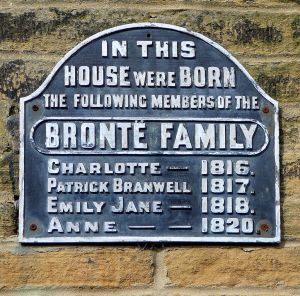 Works by the Brontës

Works About the Brontës