← HOW MONSTERS ARE BORN
Ian Fleming: A Life Leading to 007 →

“Remember, remember, the 5th of November

Who is Guy Fawkes and why do they burn his effigies in England every 5th of November? I mean — that seems a bit harsh. To be fair, the modern-day celebration is more about fireworks and parades, which is far more humane than what actually happened to Guy Fawkes in the aftermath of November 5th, 1605.

Some History: A few months before the fateful November 5th a group of men, Guy Fawkes among them, were plotting to kill King James I of England. Why, you ask, would they want to do such a thing?

The hatred of the monarchy began with the throne’s predecessor, Queen Elizabeth I. Under Elizabeth’s reign it was illegal for Catholics like Fawkes and his co-conspirators to celebrate mass or marry according to Catholic rites. Maybe if the Pope hadn’t excommunicated Elizabeth I in 1570 she would not have gone to such lengths, which included killing dozens of priests.

After the reign of Elizabeth I ended in 1603 Catholics in England had hope that King James I would be different. His mother, Mary Queen of Scotts, was Catholic, and it was said that his wife converted to Catholicism. It was even rumored that King James I would convert as well. Unfortunately for the Catholic population, King James I treated them just as poorly as the former Queen had. He publically condemned the Catholic religion, referred to it as a superstition, and ordered all Catholic priests to leave England. And so, a group of Catholic dissidents decided to blow him up.

But how do you go about blowing up the King of England? In what would later be called the “Gunpowder Plot”, Guy Fawkes and 12 others planned to blow him up indirectly. 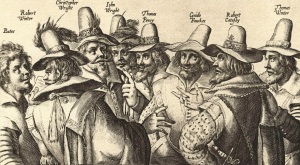 The Plot: Many people believe that Guy Fawkes was the mastermind behind the Gunpowder Plot. In reality, he’s probably so popular because he was caught in the act of carrying it out. The real leader and creator of the plot was Robert Catesby. His idea was to kill the king, kidnap his daughter, and marry her off to a Catholic to restore their rights in the kingdom. In order to do that the current regime had to be destroyed.

Using the alias John Johnson, Fawkes was chosen to pose as caretaker of a cellar located directly below the House of Lords. The group had managed to smuggle 36 barrels of gunpowder into the cellar and would wait until the 5th of November when Parliament was in session for Fawkes to light the fuse.

The Mysterious Letter: To this day no one knows who sent the letter that unraveled the Gunpowder Plot. The letter advised its recipient to avoid the House of Lords, which was handed over to authorities and spurred them to search Westminster Palace. They found Fawkes in his cellar, along with the barrels of gunpowder and a match. That was all of the evidence they needed to capture Fawkes and torture him until (after two grueling days) he revealed the names of his co-conspirators. Four were killed while resisting arrest; the others were tried and executed for their treason.

The Punishment: Being found guilty of treason in seventeenth-century England was one of the last things you would ever want to happen. Fawkes was to be hung, drawn, and quartered after having his stomach opened before his eyes. Fawkes, a rebel until his death, jumped off the hangman’s platform and died from a broken neck. Although he saved himself from his horrible punishment, they still quartered him to be sent to the four corners of the kingdom as a warning to potential traitors.

Unintentional Consequences: The Gunpowder Plot had not only failed, it backfired. King James I worked even harder to make sure Catholics knew he, not the Pope, had authority over them. The king required that every citizen take an oath saying just that. Catholics in England were not fully liberated from legal restrictions including the right to vote, practice law, or serve in the military until the 19th century. 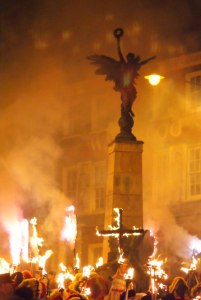 The Celebration: The king and parliament had narrowly escaped being blown to pieces. In 1606 they would officially commemorate November 5th as a day of thanks and celebration. Back then, there was still an anti-Catholic atmosphere surrounding the festivities. They would burn effigies of the Pope and Guy Fawkes. They also gathered for parades, set off fireworks, and made huge bonfires.

Today’s Celebrations: Britain still celebrates Guy Fawkes Day every 5th of November. Although the anti-Catholic sentiment is nowhere near as wide-spread, some groups still burn effigies of the 1605 Pope in keeping with tradition. The town of Lewes is particularly noted for burning effigies, including the Pope, Guy Fawkes, and current political figures. Different towns celebrate in different ways, but among the celebrations you will find burning tar barrels, seriously big bonfires, fireworks, torches, costumes, and members of bonfire societies leaping through open flames. Not an event for the faint of heart. 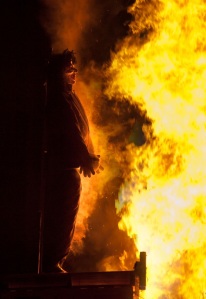 The Mask: Americans might not know Guy Fawkes from the 5th of November plot, but from the Guy Fawkes masks used by protestors to protect their identity. The graphic novel and film V for Vendetta used the mask while overthrowing a suppressive government in future dystopian England. What inspired protestors to use it in real-life situations? The illustrator of the graphic novel, David Lloyd, says it best, “It’s a great symbol of protest for anyone who sees tyranny.”

Many groups have used Guy Fawkes’ face as a way to protect their identity while protesting against what they consider to be tyrannical establishments. From the hactivist group Anonymous to Egyptian protestors during the Arab Spring movement, these masks have become a symbol of anti-establishment protest.

Guy Fawkes may have lost the battle for Catholic rights in 17th century England, but his face has come to serve as a symbol of protest throughout the world.

← HOW MONSTERS ARE BORN
Ian Fleming: A Life Leading to 007 →