Happy Bastille Day!: Now what is it?

Bastille Day is July 14 this year and every year in France. It is the French National Day which celebrates the unity of the french people and commemorates the storming of the Bastille in 1789. So what exactly is a Bastille, you want to know? 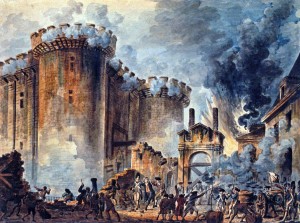 The Bastille was a fortress in Paris, known formally as the Bastille Saint-Antoine, for the district that it was in. For most of its history was used as a state prison by the kings of France. The fortress was originally built to defend the eastern gate of the city of Paris from the English threat in the Hundred Years’ War, in the 1300s. It was a strong fortress with eight towers which protected that highly strategic entrance at the eastern edge of Paris. It was made into a state prison in 1417, used by both the invading English and the French. As Paris grew and spread beyond the gates, the Bastille became surrounded by houses, and was a less of a fortress and more of a prison. King Louis XIV used the Bastille to lock away any of the nobility who opposed him or angered him. Under kings Louis XV and XVI, the fortress was used to detain prisoners from all classes and as a police station, prison and arsenal.

On July 14th, 1789the Bastille was stormed by a crowd filled with revolutionary zeal, some intent on freeing the prisoners, others who wanted the valuable gunpowder held within the fortress. The seven remaining prisoners were found and released. This revolt was the start of the French Revolution. The Bastille became an important symbol for the French Republican movement, and was later demolished and replaced by the Place de la Bastille. 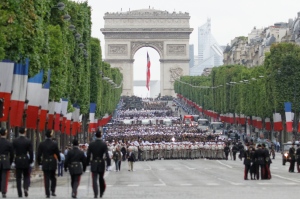 But how do they celebrate Bastille Day?

Books and other materials you may want to a take a look at: