Edgar Allan Poe finished his popular and unique poem “The Raven” in January 1845. Set on a cold December night, it makes perfect sense that it was released in January. It made him famous, but not what he also craved to be… rich.

Poe chose a raven as the central symbol in the story because he wanted a “non-reasoning” creature capable of speech. He decided on a raven, which he considered “equally capable of speech” as a parrot, because it matched the intended tone of the poem. Poe said the raven is meant to symbolize “Mournful and Never-ending Remembrance”. He was also inspired by Grip, the raven in Barnaby Rudge: A Tale of the Riots of ‘Eighty by Charles Dickens.

Poe really knows how to create a mood, to make his reader feel the shadows, the creepy noises in the room, the croak of the bird. This is a poem that pulls you into a moment. Like anything that scares you in a fun way, this is all about making you feel like you are experiencing the story while you read it. It’s spooky and a little spine-tingling, like a good horror movie. It’s fun to read – it’s meant to be read out loud. Try it and see how satisfying these lines are when they roll off the tongue. He’s trying to make his poem as musical, hypnotic, and captivating as possible. All of this complicated rhyme and rhythm aims at drawing you more completely into the world of the poem.

It’s interesting to think that people have been excited (and scared) by stories like this for hundreds of years. Folks in the 19th century read Poe for the same reasons we read Stephen King: that creepy thrill in reading about scary things happening to other people. When you read a story about someone slowly losing his mind, you might be horrified, but it’s also pretty hard to put it down.

And now a little about Poe the man: 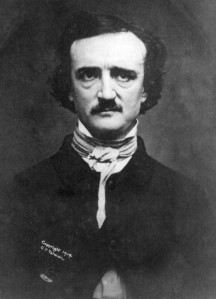 He was born to traveling actors in Boston on January 19, 1809. By the age of three both of his parents had died, and he was taken in by the wealthy tobacco merchant John Allan and his family in Richmond, Virginia. Mr. Allan tried to raise him in his own image as a businessman and a Virginia gentleman, but Poe had dreams of being a writer like his childhood hero, Lord Byron. By the age of thirteen, Poe had compiled enough poetry to publish a book.

In 1826 Poe attended the University of Virginia, where he excelled in his classes while accumulating considerable debt. To teach him frugality, he was sent to college with less than a third of the money he needed, so he soon took up gambling to raise money to pay his expenses. By the end of his first term Poe was so desperately poor that he burned his furniture to keep warm. Angry and humiliated by his poverty, he returned to Richmond to visit the home of his fiancée, only to discover she was engaged to another man. Heartbroken, he left Richmond, vowing to become a great poet and to find adventure. He published his first book Tamerlane by age eighteen and then he enlisted in the United States Army. Two years later he heard that Mrs. Allan, the only mother he had ever known, was dying of tuberculosis, who was hoping to see him before she died. By the time Poe returned to Richmond she had died and had already been buried. He and Allan briefly reconciled, and Allan helped him gain an appointment to the United States Military Academy at West Point.

Before going to West Point, Poe published another volume of poetry. While there he found out that Allan had remarried without telling him or even inviting him to the ceremony. He threatened to get himself expelled from the academy. His wish came true; after only eight months at West Point he was thrown out, but he soon published another book.

Broke and alone, Poe turned to Baltimore, hoping to find relatives in the city to stay with. His aunt, Maria Clemm, became a new mother to him and welcomed him into her home.  Her daughter Virginia first acted as a courier to carry letters to his lady loves but soon became the object of his desire.  He started publishing his short stories; one won a contest sponsored by the Saturday Visiter. This allowed him to publish more stories and eventually gain an editorial position at the Southern Literary Messenger in Richmond. He had found a home as a magazine writer.  In 1836, when he was twenty-seven, he married Virginia (she was 13!). After six plus years of marriage, his beloved wife died of tuberculosis. (1847) No wonder he wrote of dark and depressing things. His life was depressing. And all his life he was a true, starving artist.

He kept trying to find a better paying job, moving to Philadelphia and to New York, but it wasn’t until he published The Raven that he began to be a household name. Unfortunately, he only lived another two years after his wife died, dying from mysterious causes (still unknown, even to this day) at the age of forty-nine in Baltimore. Oddly enough, after his death he finally became more famous because of author Rufus Griswold. Poe strongly criticized his works, so upon Poe’s death Griswold struck back, but it backfired. It only made Poe more popular.